For some reason Porsche is a supercar brand that most people see as an achievable goal even when some models cost a lot more than the Italian rivals. The automaker is famous for it’s 911 model, but those numbers actually cover a wide range of Porsches that may look the same to the untrained eye, but there’s many differences inside and out with regards to engines and drivetrains – you have to know your stuff if you decide to tackle with one on the streets if only to avoid embarrassment. One of the most popular models is the 911 Turbo Cabriolet and it’s bigger brother, the Turbo S Cabriolet, and it’s easy to see why.

With Porsches having the same basic shape over the years, it stands to reason that things inside will also retain some basic guidelines. As with most 911s the cabin is filled with premium quality materials in the form of brushed aluminum, all manner of leathers and a helping or two of carbon fiber if optioned. There are plenty trim and color options available that should see creative owners being able to spec a unique package. The race-style seats can be optioned with power adjustments from 4-way to 18-way (the latter being around $1,150) and can be made to match the dash and door cards or can be a complete contrast. There’s a typical Porsche instrument cluster in the 911 Turbo Cabriolet with the tachometer tagging center stage, visible through a brilliant a 3-spoke multifunction sports steering wheel. In the center of the dash you’ll find the clear screen for the improved infotainment system just above the climate control panel. Luggage space? As pointless as the rear seats.

With the Porsche 911 Turbo Cabriolet sharing platforms and underpinnings with other serious performance Porsches, you can expect a drive that’s nothing short of exhilarating. The twin-turbocharged flat 6 is a beast of a motor, and in the S model even more so. A variety of drive modes offer different handling response, but engaging Sport+ and using the Sport Response button (puts powertrain and settings on optimum for 20 seconds) is when things get silly. The all-wheel drive system and it’s associated electronics do an amazing job of eliminating wheel spin and manage to convert all that horsepower into a rapid forward motion that will catch you off guard. In fact in the Turbo S Cabriolet the launch is so near perfect that it’s one of the quickest 0-60 mph cars in production. As for the rest of the drive, the steering is precision sharp and the PDK transmission shifts to the next gear before your brain has even realized there is a next gear. This is a car that makes slow drivers look fast. 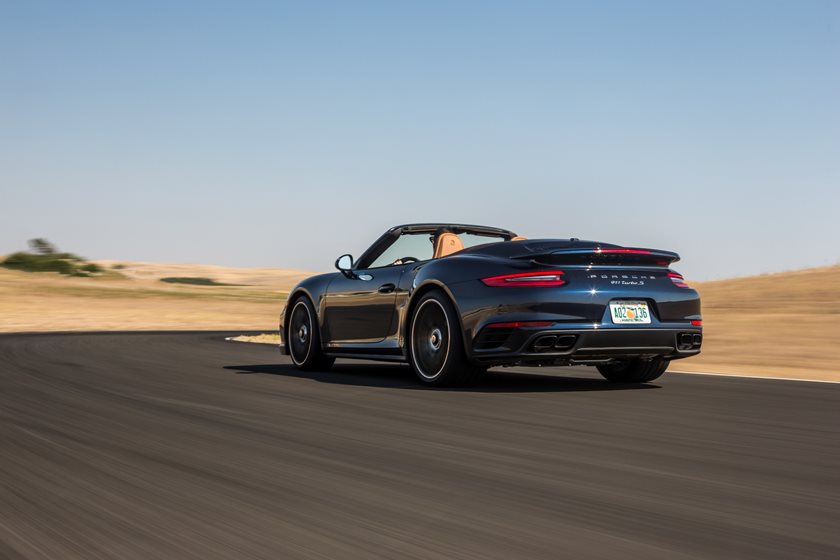 Performance is the name of the game in the Porsche 911 Turbo Cabriolet. Here the 3.8-liter’s twin-turbochargers are tuned to produce 540 hp and 486 lb-ft of torque and this will send the car to 60 mph in an amazing 2.9-seconds. For the Porsche 911 Turbo S Cabriolet attention was paid to the turbochargers and the tune and so the added S sees power rise to 580 hp with 533 lb-ft of torque, and through much electronic wizardry and magic, the car has been times to hit 60 mph in as little as 2.6-seconds. It can also run the quarter in less than 11-seconds and tops out at 205 mph. Porsche’s brilliant 7-speed PDK transmission and the all-wheel drive drivetrain is found in both models.

There’s all the usual tech and spec in the Porsche 911 Turbo Cabriolet that’s much the same across the range. Driver aids and convenience features include system like dynamic chassis control; 4-wheel traction control, stability control, adaptive cruise control and lane-change assist among others. For the best performance you need a Sport Chrono package, and if you want to drown out a screaming engine then the $3,710 Burmester high-end surround sound is available. The open top Porsche sees fitment of dual front airbags, side airbags and a thorax airbag located in the seat side bolsters. With no roof some extra protection is needed and so there’s a Rollover Protection System that extends up from behind the rear seats if the on board sensors suspect a rollover.

You can look around the Porsche 911 Turbo Cabriolet for as long as you want, and you can walk around inspecting the interior in the same way and you’d be hard pressed to find a way to criticize the car. Small things that may annoy can usually be changed to a specification, color or material of your choice to rectify things. It’s a great-looking 911 that’s not only built to the usual high quality, it’s a fast and powerful supercar that’s up to the task of being a daily driver and can double as a track toy if you have the tire, fuel and brakes budget. As a whole, in either Turbo Cabriolet or Turbo S Cabriolet guise, you get a great package but you do pay for all the car’s accolades. 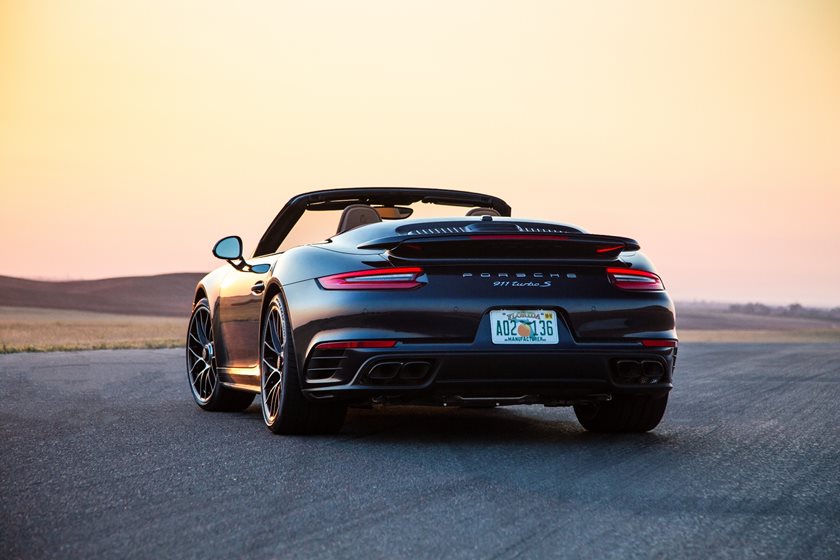