2019 Porsche 718 Boxster Spyder: Everything We Know So Far

Will it be the last naturally aspirated 718 Boxster?

Whenever the end is near for the current generation Porsche 718 Boxster, the German automaker goes all out with the last variant of the popular roadster, the Spyder. Likely to arrive sometime this summer, the 2019 Porsche 718 Boxster Spyder is currently undergoing final testing, evidenced only a few weeks ago by spy shots featuring a lightly camouflaged advanced prototype. It was immediately evident this was the Spyder thanks to its tent-like soft top, a trademark feature limited solely to this hardcore variant. 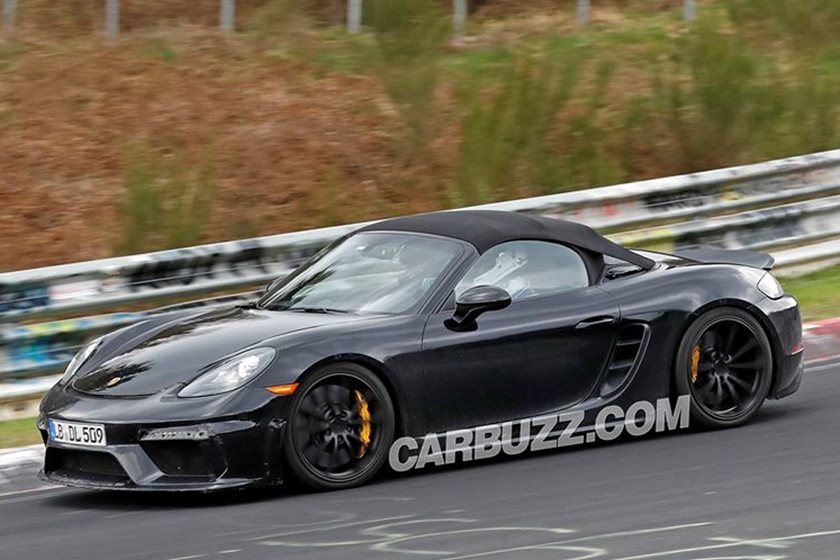 Although Porsche, like it always is regarding future models, has been mum on details, we’ve managed to learn quite a bit about what could be the final naturally aspirated 718 Boxster (formerly known as just ‘Boxster’). Like its coupe sibling, the 718 Cayman, Porsche engineers are taking this mid-engined platform to its limits which, in some ways, makes it the preferable choice over the 911. However – and this has always been the case – Porsche won’t let the 718 Boxster/Cayman exceed the iconic 911 in terms of overall performance and general capabilities. What the upcoming 718 Boxster Spyder (and 718 Cayman GT4) will likely offer is the best-handling mid-engined sports car on the planet today. 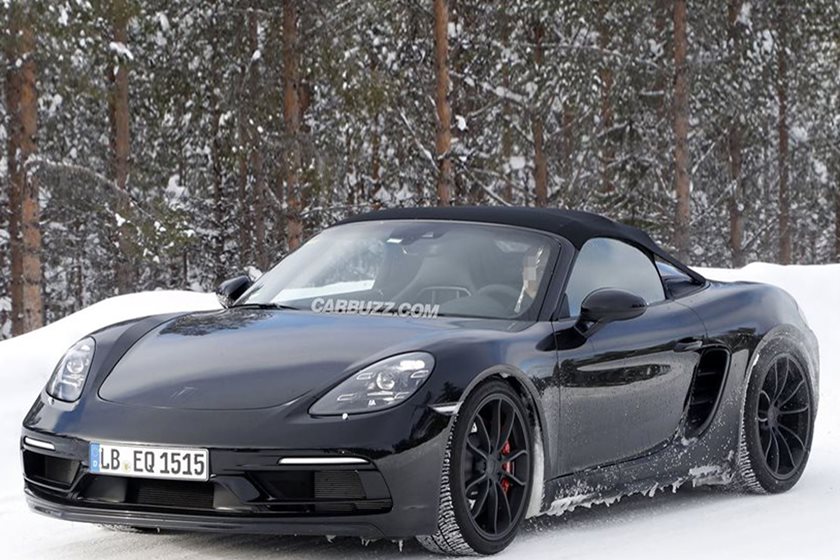 Power is expected to come from the very same 4.0-liter naturally aspirated flat-six found in the 911 GT3, though it’ll be detuned from the latter’s 500 hp to around 425-450 hp, give or take. Power will be directed to the rear wheels only through either a six-speed manual or an optional seven-speed PDK dual-clutch transmission. Those seeking to optimize track performance are recommended to go with the latter gearbox option. An ideal (or close to it) 50:50 weight distribution is all but guaranteed. One of the other key obstacles engineers had to overcome was weight. As is the case with all convertibles, slicing off the roof, believe it or not, increases weight because of necessary structural additions needed for rigidity. 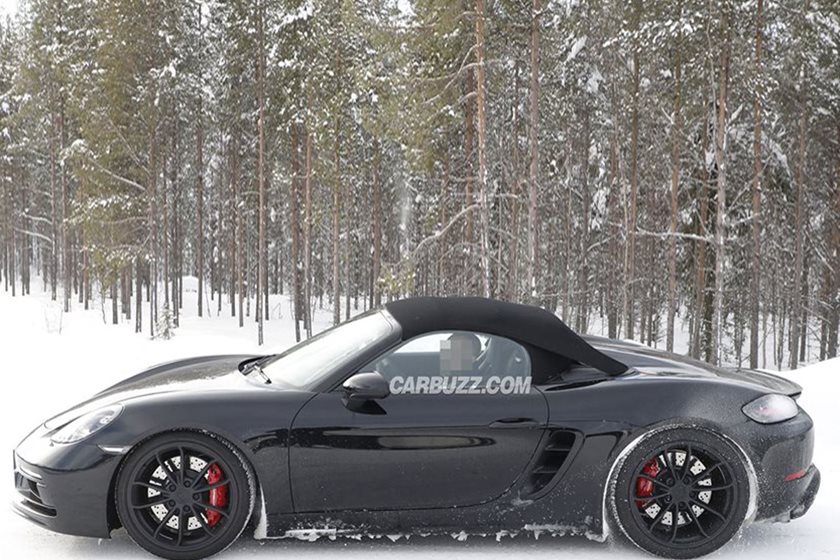 And because the Boxster Spyder has always been the lightest of the current generation, specific weight-saving changes are needed. For starters, the electric folding top is swapped out in favor of that aforementioned “tent top”. Without the mechanism needed for the automatic soft top, a couple hundred pounds is eliminated right there. Features like sound-deadening materials, air conditioning and a radio will also be removed, although the latter two could be options. Porsche is so hardcore about shaving weight that as it's done in the past, removed the traditional (metal) interior door handles, in favor of nylon-like handles.

As far as the exterior goes and aside from the unique top, previous spy shots clearly show a new rear diffuser and the rear pair of “humps”. A set of Michelin Pilot Sport Cup 2 tires will be standard to further provide the best-handling driving experience possible. Although we expect Porsche to reveal the new 718 Boxster Spyder sometime this summer online, it likely won’t make its live debut until early October at the Paris Motor Show. However, this is also when the next generation 911 could make its debut appearance, so we’re a bit unsure as to whether Porsche wants its most iconic model to share the spotlight with anything else, no matter how incredible it’ll be. 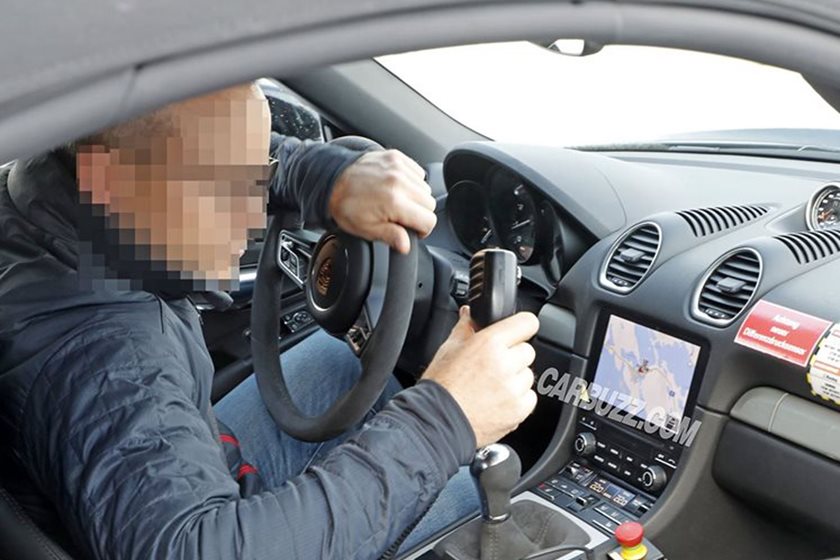 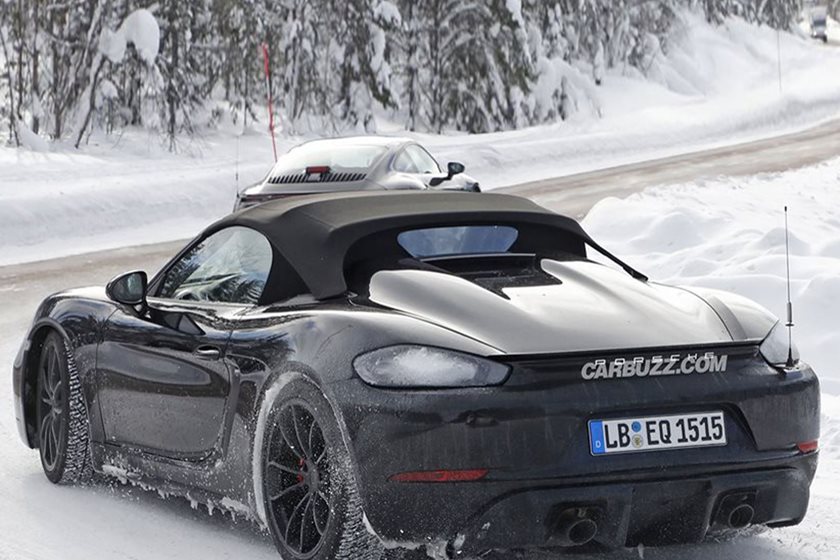 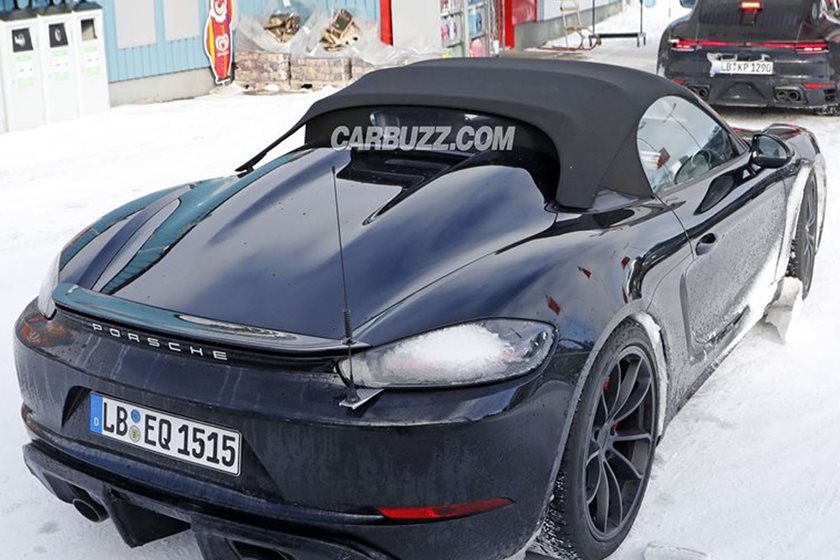 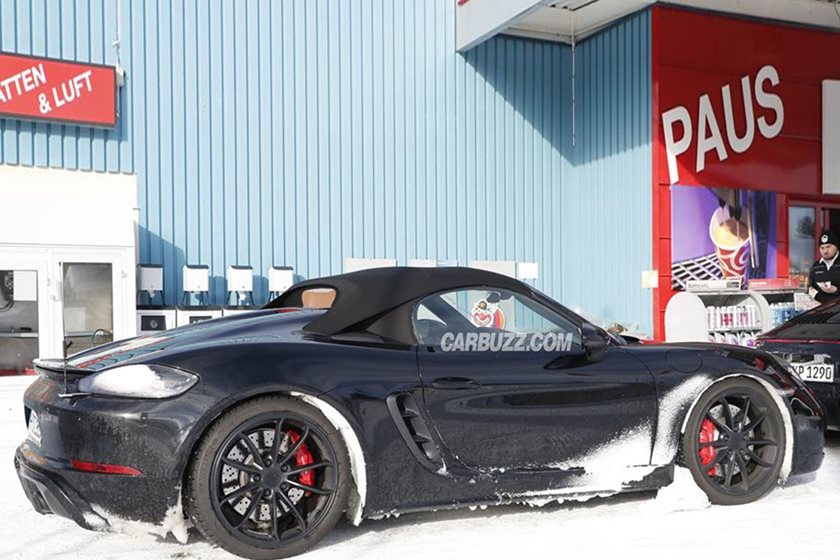 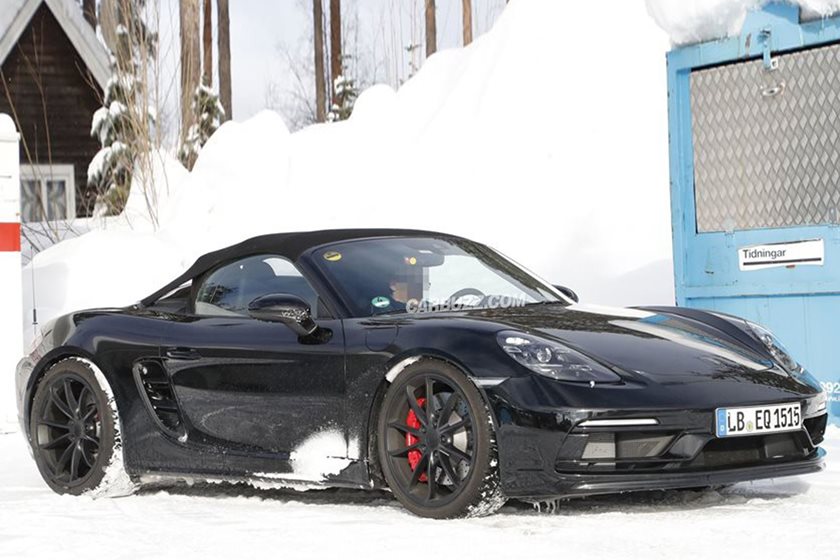 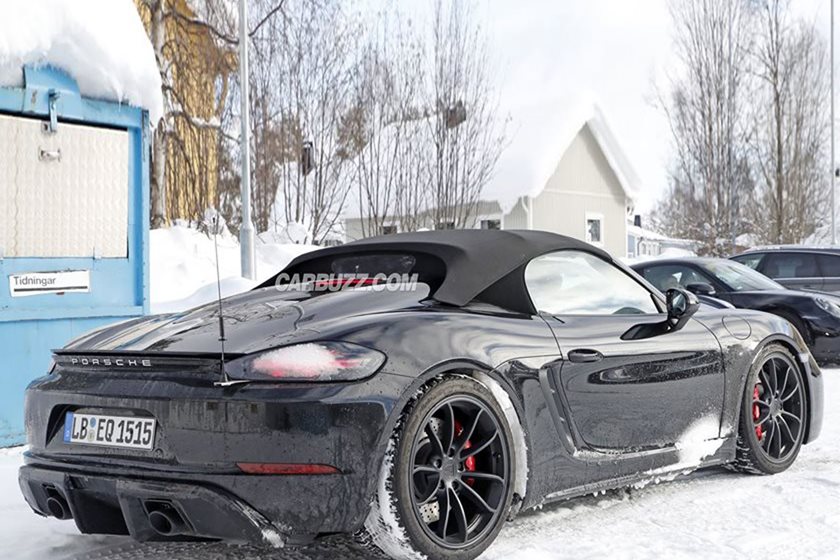 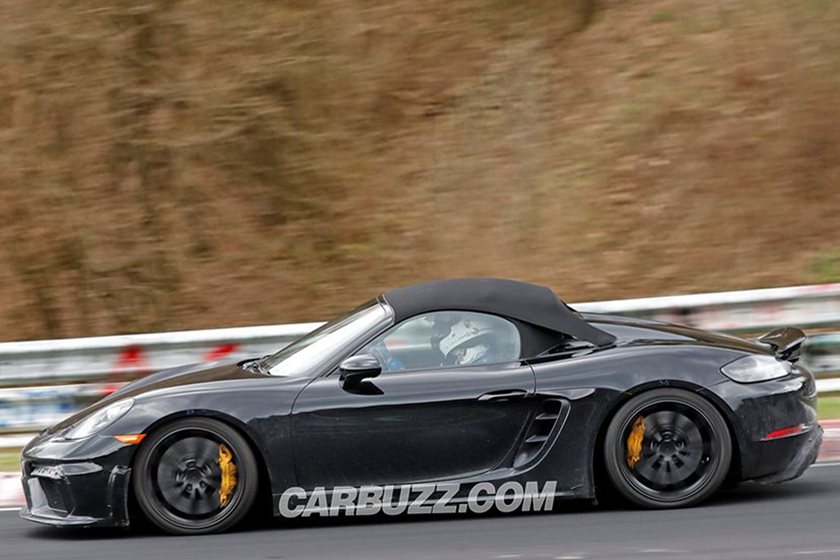 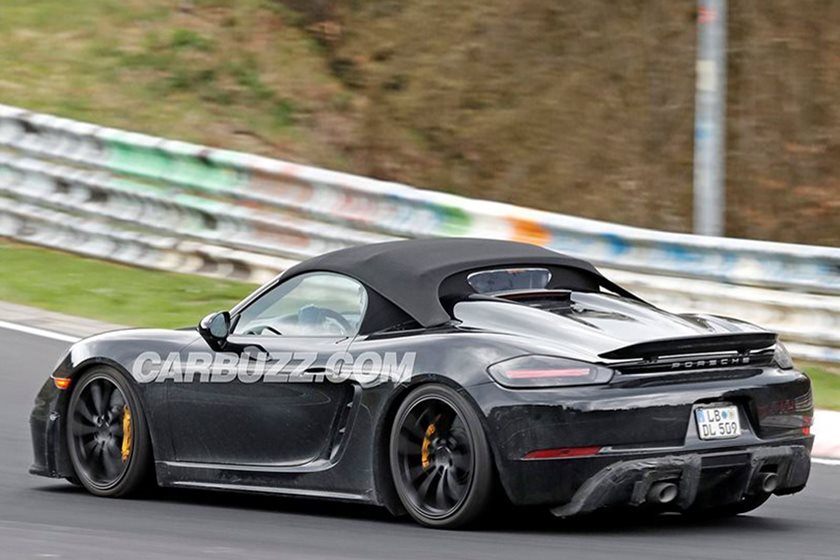 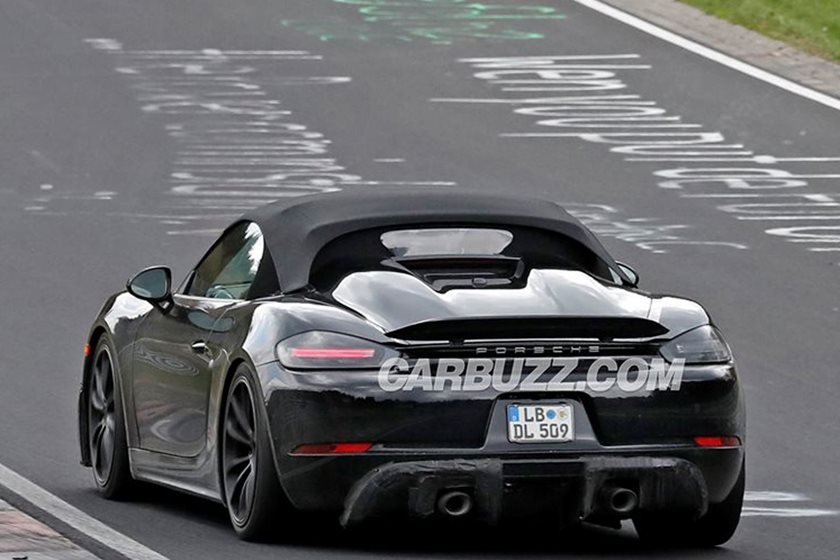